Wendy’s Will Launch Three New Items This Fall, According to Memo

Dr. Fauci Says This is the #1 Thing to Not Do Right Now — Eat This Not That 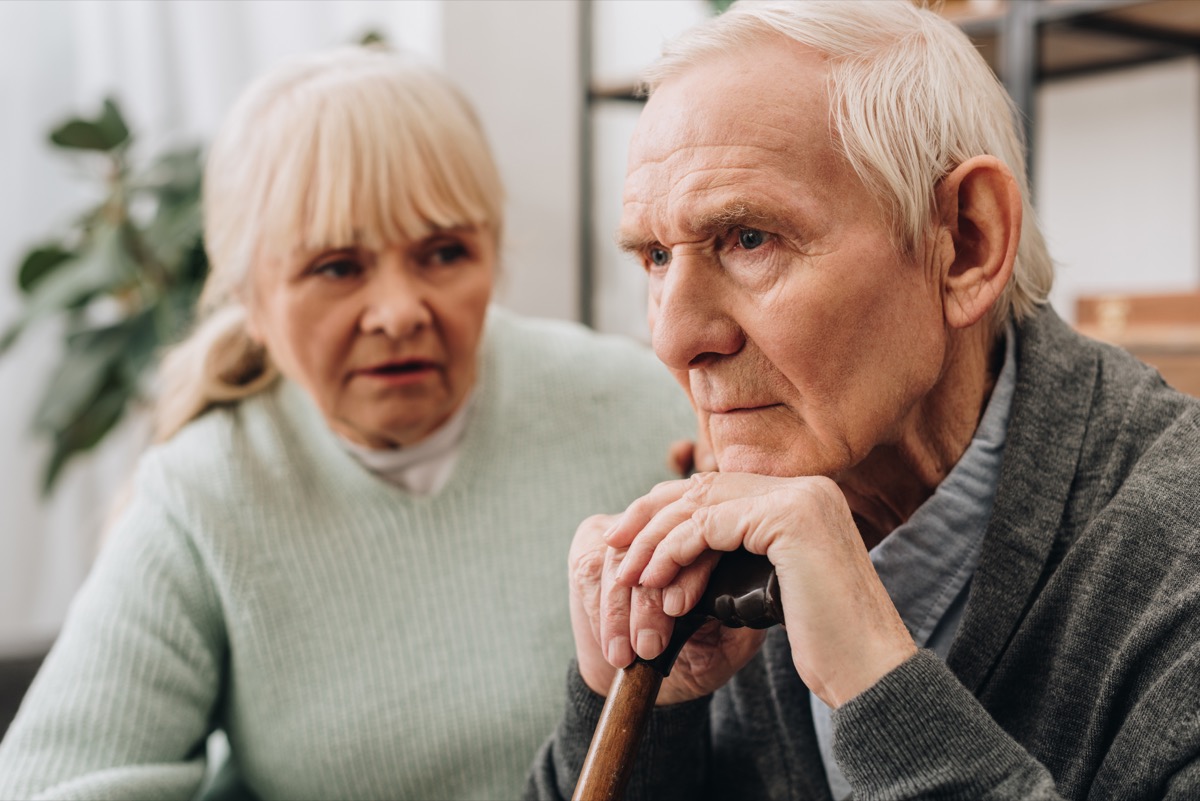 Several studies have found that happiness comes with age—older people report greater emotional well-being and more personal satisfaction and security. At the same time, aging comes with its share of worries, particularly health issues. For many, chief among those age-related concerns is dementia, a progressive cognitive decline that’s becoming more common as more of us live longer. It’s important to recognize the signs of dementia and seek treatment early, to slow its progression or correct cognition issues if possible. Read on for 7 things you need to know to keep yourself sound of mind—and to ensure your health and the health of others, don’t miss these Sure Signs You’ve Already Had COVID.

“In short, dementia is a disorder characterized by a decline in cognition involving one or more cognitive domains: learning and memory, language, executive function, complex attention, perceptual-motor, and social cognition,” says Jean-Smith. People with dementia experience a decline in one or more of these areas that is severe enough to interfere with daily functioning and independence.

“If you’re reading this article and concerned that you might be getting dementia, you probably are not, because most patients with dementia do not notice the symptoms,” says Jean-Smith. “In fact, it is usually a concerned family member or friend that notices the decline and brings it to the attention of the healthcare practitioner.” These are some of the signs to watch for.

RELATED: Sure Signs You’re Getting Parkinson’s, According to Science

People with dementia may have trouble remembering things that are subtle at first, “like what they had for breakfast, forgetting where they left an item, or having a hard time remembering why they entered a certain room,” says Holly Schiff, Psy.D., a licensed clinical psychologist based in New York and Connecticut.

This can include difficulty remembering important events or appointments, or forgetting familiar routines like recipes always cooked from memory, says Jean-Smith.

RELATED: The #1 Worst Habit For Your Liver, Say Experts

A person with dementia may begin having trouble with reading, writing, or complex mental tasks like balancing a checkbook, following directions, or making calculations, says the Centers for Disease Control and Prevention. Familiar chores, like paying bills, may become difficult.

Conversely, coping with the unfamiliar can be hard for a person with dementia, who may have trouble handling unexpected events or changes in routine, says Jean-Smith.

Someone with dementia may have trouble navigating through familiar places. They might get lost or have difficulty remembering familiar routes, like the correct off-ramp on a highway, says Jean-Smith.

A common early sign of dementia is the impaired ability to communicate, says the CDC. The affected person might have trouble finding the right words, finishing sentences, or following directions or conversations.

RELATED: The #1 Reason You Can’t Remember Something, According to Science

A person with dementia may seem apathetic or emotionally flat, lose interest in previously enjoyed hobbies or activities, or avoid spending time with friends and family, says Schiff.

A change in attention level or ability to concentrate may also indicate dementia. “It’s very unlikely an aging adult would have a new diagnosis of attention deficit disorder (ADD),” says Jean-Smith.

RELATED: The #1 Habit That Ages Your Skin Faster

“Memory problems and forgetfulness don’t automatically mean you have dementia,” says Schiff. “These are normal parts of aging and can be caused by other factors, but you shouldn’t ignore the symptoms.”

If you notice signs associated with dementia, and they aren’t improving, “it’s important to see your doctor so they can rule out other causes for your symptoms and determine whether it is dementia or another cognitive problem,” says Schiff. “It is especially important because with early diagnosis and treatment, you can slow the progression of the disease and maintain your mental function.”

Making a dementia diagnosis is complicated and may require a referral to a specialist, says Jean-Smith. That might include a geriatrician, neurologist, or neuropsychologist. And to get through this pandemic at your healthiest, don’t miss these 35 Places You’re Most Likely to Catch COVID.

The Best Yogurt To Lower Your Cholesterol, Dietitians Say

The Best Yogurt To Lower Your Cholesterol, Dietitians Say

Gwyneth Paltrow Swears by This Health Habit at 50 To Look...