Everyday Habits That Lead to Aging — Eat This Not That 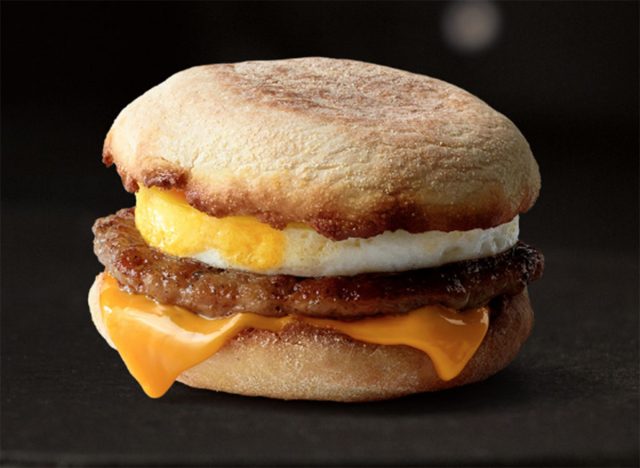 A hangover is not a pleasant experience, as far too many of us know far too well. At least they do tend to pass in a matter of hours—ideally leaving us a bit wiser when it comes to moderation next time—and, while you’re in the midst of a hangover, there are some things you can do to abate them.

Most hangover symptoms are caused by dehydration and an imbalance of electrolytes, so drinking lots of water and a few servings of a sports drink can help. Headaches can be treated with over-the-counter pain medications. And as for that upset stomach, that greasy fast food you’re craving actually will help to some extent—though note that the best time for a big, greasy meal is before you start drinking, as the fats slow the absorption of alcohol even better than regular foods.

Your brain naturally produces higher levels of the neuropeptide galanin when you begin drinking, and this causes you to want to drink even more. This same neuropeptide also increases the desire for fatty foods, so consuming those (instead of more booze as the “hair of the dog” cure) can settle your system some.

While the best time for that big, fatty meal as it relates to drinking is before the carousing starts, the second best time for a grease bomb is the morning after the boozing. The best time of all, from a health standpoint, is never, of course, and that’s to say the greasy meal and the overindulgence. But we’re going to go out on a limb and guess it’s too late for that right now, so here are 8 of the best fast food orders to relieve your hangover symptoms.

RELATED: 10 Burger Chains With the Best Quality Meat in America

According to Medical News Today, eggs are a great hangover cure food because “eggs are a good source of nutrients and contain simple proteins that are particularly gentle on the stomach.” Plus, the biscuit will give your body some carbs to help sop up the last of that ethanol. Commenters on a Reddit thread also swear by the McDonald’s Steak, Egg & Cheese Bagel, which just so happens to be popping up at McDonald’s locations across the country.

One Twitter user shared his ultimate hangover cure food: the Crunchwrap Supreme. This is a good call, as this menu classic has around 550 calories, plenty to fuel you up for much of the morning, and plenty of that fat your brain is craving—not to mention some healthier ingredients like lettuce and tomatoes. Many others seconded Taco Bell.

RELATED: McDonald’s and Taco Bell Still Use Beef That Is Putting Public Health at Risk, According to a New Investigation

The classic Whataburger meal is a go-to choice for one Reddit user when he wakes up feeling rough, and his reply garnered a number of “upvotes” when shared. The poster elaborated that the proper order was a Whataburger #1 meal, which is the chain’s flagship burger served with fries and, for this user, a Dr. Pepper.6254a4d1642c605c54bf1cab17d50f1e

The description of the Sourdough Jack makes it pretty clear why this is a great hangover food: “100% beef seasoned as it grills, hickory smoked bacon, tomato, melty Swiss-style cheese, mayo & ketchup on toasted sourdough bread, plus fries & a drink.” Thus the veritable love letter one Instagram user wrote about this fast-food meal as a hangover cure, saying in part: “Heaven knows no equal.”

An In-N-Out burger tastes great any time, and can be especially delightful when you’re battling a hangover. One Reddit user who called it their go-to hangover food had an interesting idea for taking things up a notch, too, saying the trick was to order a burger and “Animal Style” fries from In-N-Out and then to “put the fries in the burger.” Other burgers mentioned are those from Five Guy’s and Burger King. Any greasy burger with cheese and bacon will probably do.

A Subway Italian BMT is the go-to hangover food for one Twitter user, and it’s a fine choice, really. The sandwich, in its footlong variation, has about 710 calories and enough variety of ingredients to give your body all sorts of nutrients as well as the salts it’s missing after all the booze.

RELATED: Subway Is Selling More Sandwiches Than Ever, Thanks to This Menu Change

In doing research for this article, we found that many people mentioned specific meals, many of which we have featured here. But there was one refrain shared over and over again on Reddit, Twitter, and beyond: Waffle House. No specific dishes were mentioned, just this favorite of fast-casual diners.

Steven John is a freelancer writer for Eat This, Not That! based just outside New York City. Read more about Steven

Anita Pointer Died After “Heroic Battle With Cancer “— Here are...