This Ice Cream Brand Is Calling For a Trump Impeachment 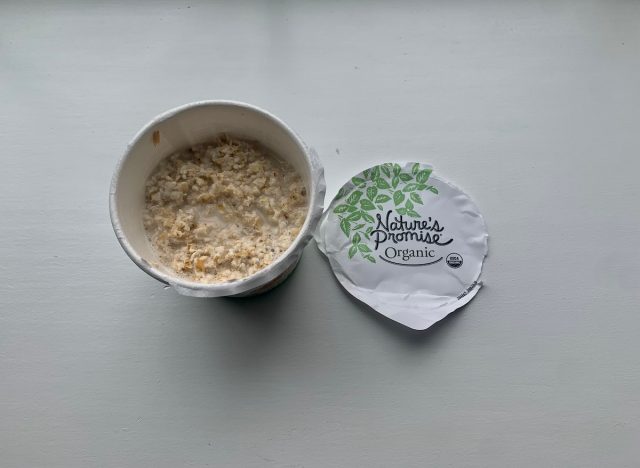 Oatmeal is full of nutrients that provide many health benefits to your body. It’s so healthy that it’s worth considering adding to your everyday diet. It’s also very versatile- you can throw in a bunch of your favorite, healthy ingredients to create a more substantial bowl. Oatmeals also make for an easy, convenient way to eat.

Food companies have not only tried their hand at making their own oatmeals but have also found easier ways to get a serving of it in your eating routine. The easiest might just happen to be microwavable, single-serve cups that you can quickly heat with water or milk. Of course, I had to do some investigating.

I decided to try seven microwavable oatmeal cups that I found on the store shelves. They had to be distributed in single-serve microwavable containers. No large containers of oats, no boxes full of packets you pour yourself. Just easy, one serving full of oats that you heat with water in the microwave.

Rated from least favorite to most, here are the microwavable oatmeals worth buying—and the ones to pass on. If you’re to try more healthy breakfasts, take a look at 37 Best Healthy Breakfasts Foods for Weight Loss.

Nature’s Promise is a family brand from Stop & Shop. It’s a brand known for its affordable yet organic take on food products. From meat to fruit to bread, this brand is all around this supermarket, and they’re usually very good. With that being said, their microwaveable oatmeal fell very flat.

With only 4 grams of sugar, 7 grams of protein, and 4 grams of dietary fiber, it’s no doubt that this oatmeal is good for your health. However, I could not get past the consistency and taste of this brand.

Once I took it out of the microwave, it did look promising. A full, fluffy-looking cup of oatmeal. However, taking a bite into it was the complete opposite. It was sticky, latching onto the roof of my mouth and behind my teeth when I would try to chew into it. The fluffy look that appeared turned out to be just dense. At one point, I flipped the container upside down to see if the oatmeal would fall out. (Spoiler alert, it did not fall out). The taste was also very bland. I know oats don’t have much taste. But if you’re promoting a healthy breakfast, make it exciting!

I honestly have never heard of this brand until I stepped foot into CVS looking for oatmeal. This CVS snack line was introduced featuring more than 40 food products that claimed to be free from artificial flavors and preservatives. The oatmeal lived to that motto, as it had no artificial preservatives, flavors, or sweeteners, and no high fructose corn syrup.

Given that I never heard of this brand before (or frankly, never paid attention to CVS brands), I did not have high expectations for this oatmeal.

However, it wasn’t terrible-tasting oatmeal. I was pleasantly surprised that I could go to CVS for more than just name-brand products. Overall, the consistency wasn’t too controversial (because let’s be real, the texture of oatmeal can be weird), and the taste was decent.

My biggest dilemma was that the oatmeal was supposed to be flavored. The flavors were microscopic. If you’re going to try and disguise the oatmeal, make sure we are tasting the other ingredients.

A beloved, well-known bran, Quaker Oats has been around since 1877. They’ve done something right, because they’re still producing an incredible amount of oatmeals and other products. Before this taste test, if you told me to name any oatmeal, I would only be able to say, “Quaker Oats.” There was just no other option. From rice cakes to cookies, I can easily say I’ve enjoyed their products.

Now, onto the reason why they ranked so low on my list. Maybe it was just the microwavable, single-serve version, but I was left fairly disappointed. I followed the instructions on the container, however, the oatmeal came out a little soupy. Because of this, the oatmeal felt mushy. To me, this was something you would feed to a baby more than an adult. The flavor was there, which was important, but the overall breakfast lacked.

Stop & Shop redeems itself with its own brand of oatmeal. This supermarket chain carries a lot of brands, including one of their family brands that also sell oatmeal, so it was very surprising that they decided on creating their own. For the record, I’m glad they did, because this one was much better than Nature’s Promise (sorry!).6254a4d1642c605c54bf1cab17d50f1e

This naturally flavored oatmeal consisted of lots of cinnamon and apple flavors, which did fairly well in masking the fact I was actually eating oatmeal. I will say the apple taste was sort of off, the texture of the incorporated fruit felt bland to me. The cinnamon overpowered the dish by a lot. However, the consistency was nice, the taste was good, and it was healthy. Overall, well-rounded oatmeal.

Rounding out my top 3 is McCann’s. At first, I had no idea what “Irish” oatmeal meant. Was it imported from Ireland? Do I have to purchase a pint of Guinness with it? For the record, I wouldn’t be against that. But instead of guessing, I decided to look it up. It turns out that for Irish oatmeal, instead of rolling the groats–whole-grain kernels of various cereal grains–, the kernels undergo a steel-cut process. Regular oats, after being chopped up, have their groats steamed, rolled, flattened, and dried, making them “more processed,” and changing their original shape to that of flakes, unlike Irish oats which mostly stay the same shape.

I’m not sure if that made a total difference in the taste of the oatmeal, but I will say that I enjoyed eating this oatmeal and would easily eat it again. The flavoring of the oatmeal was pretty delicious, minus the uneven taste of brown sugar that would turn up once in a while, then it was too sweet and intense. But the oats were cooked well and the texture was nice. Not too chewy or too liquidy. It made for an enjoyable dish.

Kodiak Cakes is known for its protein-packed foods. And the company is always pretty spot on when combining protein and flavors. This particular oatmeal had 14 grams of protein, which allowed me to reach my daily protein goal easily. I also tried the chocolate chip version, which is very unique in my opinion. It’s not often I see chocolate chips in microwavable oatmeal.

It sounded so delicious that I decided to eat it as a dessert. It was worth it. Envision a chocolate muffin or a chocolate lava cake, only healthier.  Made from 100% whole grains, it also consisted of less sugar than some of the other oatmeals I tried. I’d seriously consider swapping out my desserts for this oatmeal.

The reason Kodiak Cakes won the silver medal is that I didn’t find the oatmeal easy to microwave. I followed the instructions carefully; filled the container with water to its specific measurements, stirred, and heated it in the microwave for the proper amount of time. The first time I took the oatmeal out, it was still very watery and the oats didn’t cook through. I then stuck it in the microwave again. This time, it was a little better, but the oats were still hard. I stuck it in one more time, and the oatmeal exploded all over my microwave. Don’t worry, I salvaged it, but I’d appreciate less hassle next time.

I have never heard of this brand, so it’s clear to say I was pleasantly surprised when I tasted it. So pleasantly surprised that I ranked it the best oatmeal. This brand was acquired by PepsiCo and is known for making healthy foods using grains and seeds. Grains and seeds will also be the first ingredients you see in each of their products. For their oatmeal specifically, I thought it was a great idea to incorporate nuts and seeds into it. It really goes to show you can throw in whatever you want into oatmeal and make it amazing.

With 10 grams of plant protein, I enjoyed sunflower seeds, pumpkin seeds, walnuts, flax seeds, and chia seeds in every bite. Not only was it tasty, but I felt like I was eating so healthy with every spoonful. I also enjoyed the textural difference between this oatmeal amongst the others. The texture of the seeds broke up what is a typical mushy bowl of oatmeal. My mouth got to explore different flavors and textures throughout the meal. I am so glad I got to try all these oatmeals because if I never did the taste test, I would’ve never known about this brand!

5 Surprising Effects of Eating Tomatoes, Say Dietitians — Eat This Not That