Signs You Have Insomnia Like Jennifer Aniston — Eat This Not That

COVID Symptoms Usually Appear in This Order — Eat This Not That

Bobby Flay Just Shared a Delicious, Healthy, and Fast Fish Recipe — Eat This Not That 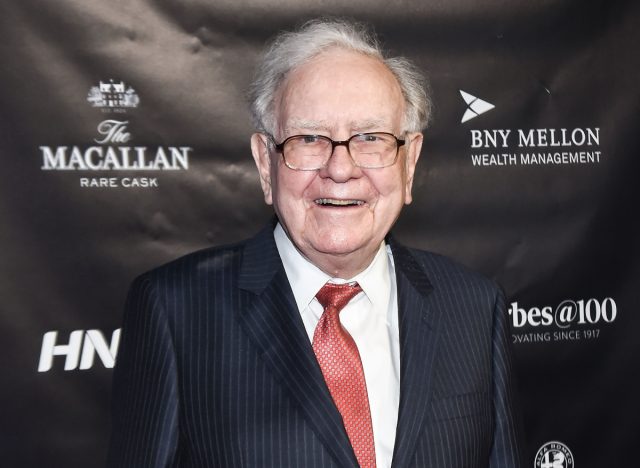 McDonald’s has recently reignited the conversation around one of its ultimate perks—the McGold Card, which grants the holder free McDonald’s food for life.

The chain will be gifting the card to three lucky customers and their three lucky friends this December. And while this is a once-in-a-lifetime Mickey D’s perk for most of us, there are select few celebs that are known to have been the owners of the McGold card for years.

While you have a chance to win your entry into this exclusive club on the McDonald’s app, from Dec. 5 until Christmas, these billionaires and politicians were awarded the perk on the basis of their high status.

RELATED: McDonald’s Is Launching a Giveaway of a Lifetime—Here’s How to Enter

Billionaire investor Warren Buffet is one of the lucky McGold card holders. He was granted the coveted access to free McDonald’s food as early as 2007.

Buffet revealed to CNBC that his McGold card is only good in his hometown of Omaha, Neb. The investor even claimed that President Clinton “wanted one very badly,” but didn’t seem to make the cut.

In that same interview, Buffet shared that Bill Gates also gets free Big Macs for life. As the co-founder of Microsoft, Gates has accumulated a net worth of about $116 billion.6254a4d1642c605c54bf1cab17d50f1e

Looks like saving money on McDonald’s fries is not exactly necessary for Gate’s bank account, but alas here we are with yet another celebrity perk. Other than Buffet’s word, however, we know very little about how Gates acquired the coveted free food pass.

Winner winner, McDonald’s dinner. Television heartthrob Rob Lowe proudly showed off his McGold Card on “Jimmy Kimmel Live” back in 2015. Lowe explained that his friend’s dad, David Peterson, a McDonald’s franchise owner, invented the Egg McMuffin and the famous mascot Ronald McDonald. According to the actor, the membership is only valid in restaurants located in Santa Barbara or Goleta, Calif.

It’s unclear whether or not Lowe’s McGold card is for life, as he mentioned that it was only given for an unlimited year’s worth of McDonald’s.

Republican Senator Mitt Romney also carries a McGold card in his wallet. According to ABC News, Romney said that his father originally was given a free McDonald’s for life card. “I found a little paper card, a little pink card, and it said this entitles George W. Romney to a lifetime of a hamburger, a shake, and French fries at McDonald’s,” he said.

McDonald’s confirmed that the brand’s founder, Ray Kroc, Romney Senior this lifetime gift, although the reasoning behind it remains unclear. All we know is, we are for sure jealous of that inheritance.

Olivia has a bachelor’s degree in communications and political science from the University of Connecticut. She is a foodie, traveler, journalist, and celebrity interviewer. Read more about Olivia

Benefits of Vitamin D May Depend on Your Body Weight, Says New Study — Eat This Not That

Benefits of Vitamin D May Depend on Your Body Weight, Says...

9 Best Protein Powders in 2023, According to Dietitians